HERE IS YOUR CHANCE TO OWN A GHOST TOWN! This sale consists of the Old Denny Station built in 1924, The Oasis, The German American Bank est. 1903, and The blacksmith Shop, The station was the hangout for farmers, ranchers, hay hands, and more for many years, they came to catch up on the daily news and enjoy a sandwich on a daily basis. The station was the site where the movie, “The Dead Can't Dance” is a clever telling of a zombie thriller in Native American style. The Oasis, was a grocery and drug store operated in 1955-1982 also a church in later years. Many improvements have been made on the buildings, The station has a new roof and stucco on the outside. The bank has had the mortar replaced. The Oasis has had rechink mortar on outside of the building, The blacksmith shop has also been rechinked with mortar and reset old rocks with a new metal roof. This property could become useful again or be restored to make many more memories in the humble town of Blackburn. Possible opportunity to house float equipment for commercial float business from Ralston to Pawnee down the Arkansas River. The opportunities can be endless. "The incorporated town of Blackburn is sited in Pawnee County on Blackburn Road, between county roads E0440 and E0450. Approximately twelve miles east of the county seat of Pawnee, the community developed after the Cherokee Outlet land opening on September 16, 1893. Named for Kentucky Sen. Joseph C. S. Blackburn, a post office was established on December 15, 1893. Positioned on the south side and at a natural ford of the Arkansas River, a toll bridge, a wagon bridge, and a ferry at various times connected Blackburn, Oklahoma Territory (O.T.), with the Osage Nation to the north. During the Territorial Era before 1907 statehood, Blackburn was one of the "whiskey towns" in O.T. that bordered the "dry" Indian Territory. The town was incorporated on April 21, 1909. Blackburn hosted the Pawnee County fair from 1903 to 1909." - Abandoned Oklahoma 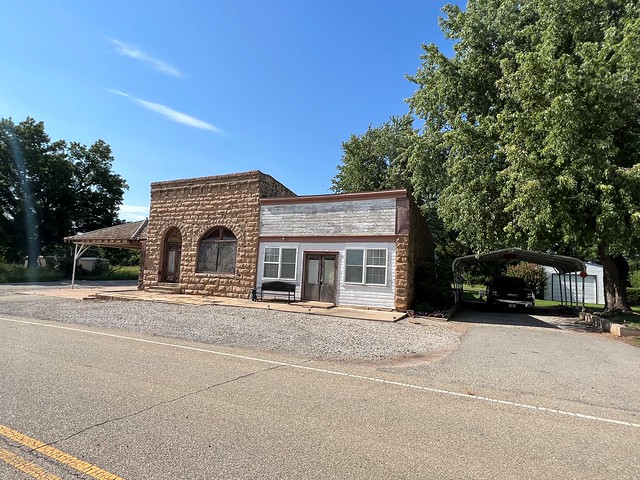